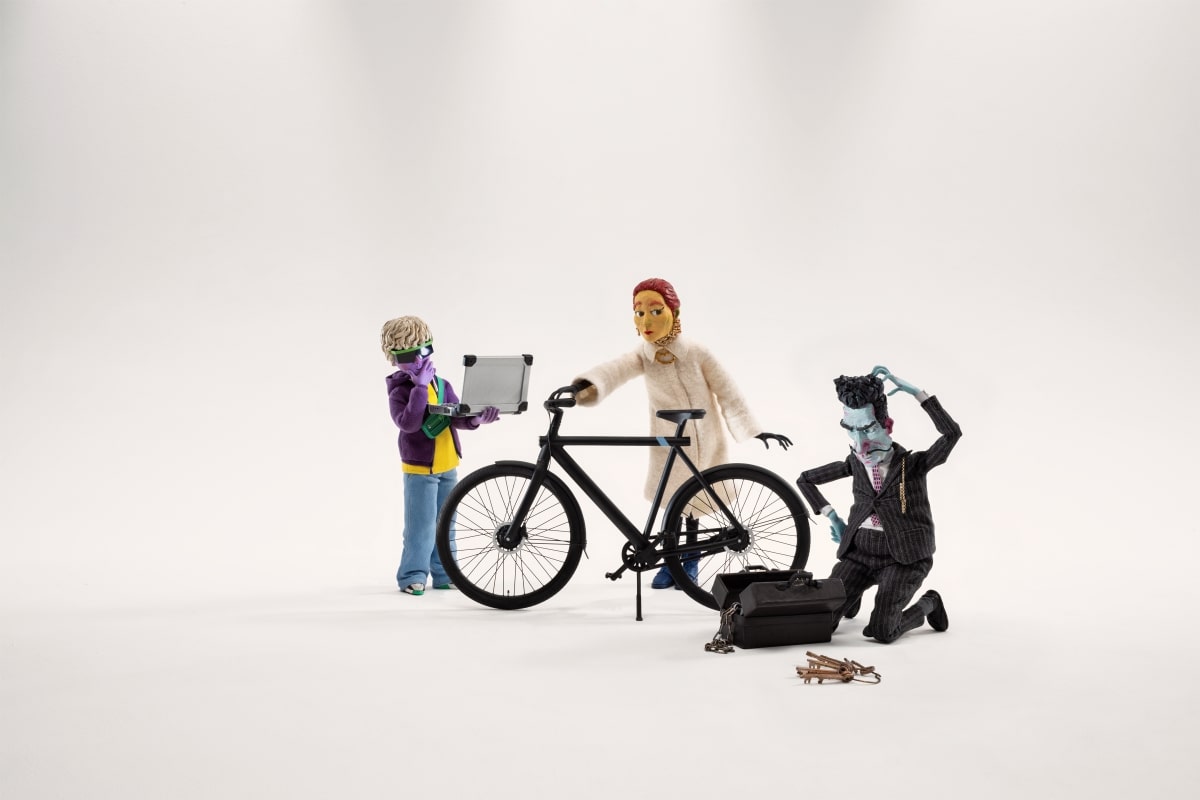 VanMoof has launched “Hard Times For Super Thieves” – a playful new campaign that demonstrates the power of its anti-theft technology and Peace of Mind coverage. The film takes the form of a series of mockumentary-style studio interviews with some highly-skilled e-bike burglars, who speak candidly to the camera about their troubled attempts to steal a VanMoof.

Following the brand’s epic Summer TV spot, leading British animator Tobias Fouracre steps up to craft an equally artful film, continuing VanMoof’s imaginative approach to brand building. The advert revolves around three finely detailed, stop-motion puppets and their foiled attempts to steal an impressive 3D-printed VanMoof S3 replica. The result is wildly inventive and light-hearted – a powerful and unique approach to handling the serious subject of bike theft and security. The characters include a Master Lockpicker who’s repeatedly confused by the bike’s nifty keyless locking system, an International Art Thief who can’t outsmart the bike’s anti-theft tracking system and a Cyber Security “Specialist” who struggles to crack its lock code. But despite their criminal tendencies, the “Super Thieves” are a highly likeable bunch.

“Real deterrents are needed to keep your VanMoof safe. Bringing these features to life in a vivid way was the film’s goal. We couldn’t be happier with the way it’s turned out. We love the characters, and we love the stop-motion approach. It makes for a truly unique and playful way to talk about a tricky subject.” Colin Cornwell, Creative Director, VanMoof

One year of Free Peace of Mind coverage

The film launch coincides with VanMoof’s current offer, where prospective riders can get a whole year of three-year Peace of Mind Theft and/or Maintenance coverage for free when they buy a VanMoof S3 or X3. The offer is available globally from January 26 until March 31.

VanMoof was founded in 2009 by Taco and Ties Carlier, two Dutch brothers with a vision of the perfect city bike. Now their bikes are changing cities and leading the current wave of people choosing e-bikes. VanMoof’s sleek, multi-award-winning rides offer a high-tech and feature-rich experience for a passionate worldwide community of 150,000 riders and counting. The iconic integrated frames mirror a fully integrated end-to-end company that has upended the bike industry by taking complete ownership of everything from design and production to sales and after-service. As one of Europe’s fastest-growing companies, VanMoof is on course to redefine the future of urban mobility and get the next billion on bikes. VanMoof Brand Stores can be found in Amsterdam, Berlin, London, New York, Paris, San Francisco, Seattle, and Tokyo, with expansion planned to 50 cities worldwide through dedicated Service Hubs by the end of 2021. Ride the Future at vanmoof.com.

Tobias is a veteran of the animation industry with an eye for detail. As a lead character animator, he has worked on Corpse Bride, Fantastic Mr Fox, Frankenweenie and was animation supervisor on Isle of Dogs. All four films have received Oscar nominations for the best-animated feature. Tobias also directs children’s T.V. with series that include Club Penguin for Disney and Koala Brothers for the BBC. Advertising credits include work for everyone from Specsavers to Marmite.