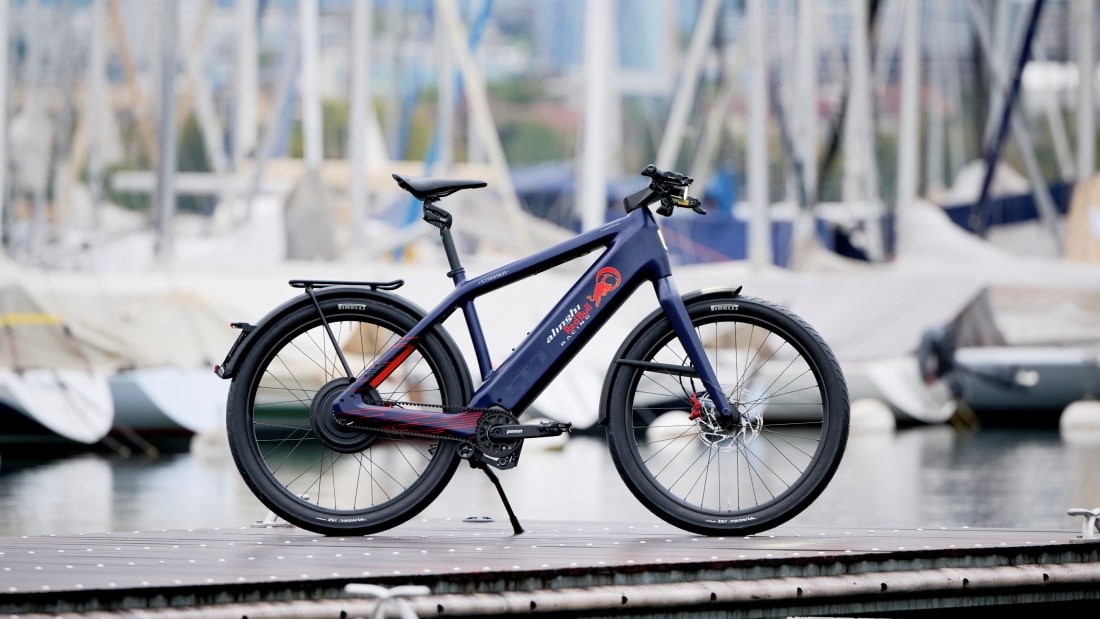 Participation in the ‘America’s Cup’, the oldest sporting trophy in the world (1851), requires vision, an innovative spirit, and a certain willingness to take risks. After an absence of ten years, Alinghi has joined forces with Red Bull with the goal of winning the 37th America’s Cup, hosted in Barcelona from August to October 2024. The Swiss company myStromer AG, a leading manufacturer of Speed Pedelecs, is now working to help Alinghi Red Bull Racing achieve this goal as the team’s official supplier of electric bikes. This collaboration is based on a long-term vision and will not only boost the team’s mobility in Barcelona, but everywhere that they go. Stromer will also introduce a Special Edition in the colors of Alinghi Red Bull Racing that is based on the model ST7 in 2023.

Alinghi Red Bull Racing’s training location is Barcelona, a busy metropolis. To support the team members on their daily journeys in the city, Stromer is the team’s official supplier of e-bikes. In addition to fast electric bikes, Stromer is also providing the team with racing bikes in the colors of Alinghi Red Bull Racing to help train the sailors. Cycling will play a key role in this competition for the 37th America’s Cup, both on land as well as on the water. The energy for the mechanical systems is generated on board by pedal systems that are operated by four members of the team: the “power group”. Modern mobility is thus a common thread between Stromer and Alinghi Red Bull Racing thanks to their interest in efficiency and performance.

“Sailing has fascinated humans around the world for centuries. Alinghi Red Bull Racing stands for performance and perfection, just like Stromer. We expect this partnership to increase the global brand awareness of Stromer and to enhance the focus on the topic of alternative mobility. We are also excited to launch an ST7 Alinghi Red Bull Racing Special Edition in 2023.” Tomi Viiala, co-CEO of myStromer AG

“We are looking forward to our collaboration with Alinghi Red Bull Racing. Passion and perfection are just two values that we share. We wish Alinghi Red Bull Racing a perfect preparation phase and victory at the next America’s Cup. We are naturally also proud to be able to ensure the mobility of the team in Barcelona with our bikes.” Karl Ludwig Kley, co-CEO / CFO of  myStromer AG

“These new boats, the AC75, are bringing cycling and sailing closer: the rules of the class allow having cyclists on board to provide the energy to operate the boat systems. The fact that we will be able to ride bikes as part of the preparation in Barcelona will also be a huge advantage for the whole team. We are truly lucky that we will be able to rely on Stromer in our quest for the next America’s Cup. We represent the colors of Swiss industry in the world and stand for the same values: precision, quality and performance. A huge thanks to them for it!” Arnaud Psarofaghis, Alinghi Red Bull Racing Sailing Team

Stromer supports sustainable, environmentally friendly mobility solutions. Stromer Speed Pedelecs can be ridden up to 45 km/h with engine assistance and represent the best of Swiss engineering. The models capture the imagination through an exclusive combination of timeless design, smart connectivity, pure performance, and maximum range.

Exclusively for its partnership with Alinghi Red Bull Racing, the Swiss company will manufacture a special series of its top model, the ST7, in the team’s colors. The new Stromer flagship combines cutting-edge technology and high-end components to create a Speed Pedelec truly in a class of its own. With a 1,440 Wh battery and a range of up to 260 km, the ST7 is the world’s first “Speed Pedelec” with new electronic Smart.Shift technology from Pinion, thus introducing vehicle driving dynamics to the e-bike. It combines reliable and virtually maintenance-free gear-shifting technology with the advantages of electronic shifting via a shift lever. Planning for additional Special and Limited Editions is currently underway.