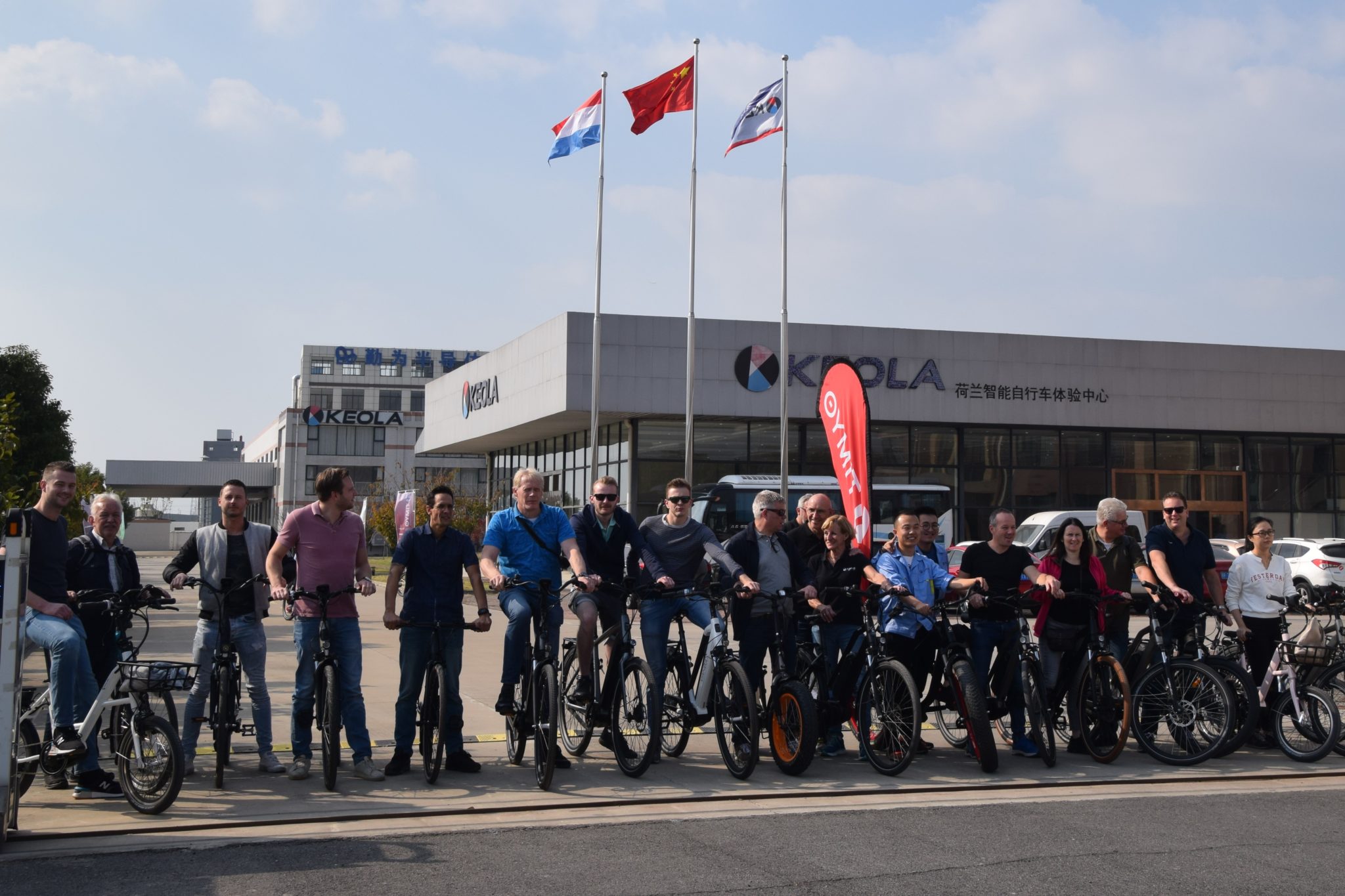 On Sunday 10 November, the participants in the E-Bike Dealer Trip to China, organized by LEVA-EU and Nieuwsfiets.nu were back in Amsterdam. It was a fantastic trip, highly appreciated by each and every participant. One of them stated: “It is impossible to explain to someone who hasn’t been there, how interesting and exciting this trip has been.”

TIMYO | First visit was to Timyo in Nantong. The factory is rather quiet nowadays, since production moved to Lithuania and the Netherlands (Roosendaal) as a result of the anti-dumping measures. In Nantong, the production is currently only for the Australian market. Timyo is active on the EU market with several brand names: VanDijck, Keola, Muon and Elon. Jan de Jong assists owner Steve Zhu and his family to shape and manage the trade and to position the brands in the EU.

De Jong presented the company and tried to enter into a dialogue with the dealers. He asked many questions, such as how dealers deal with developments in internet sales. “Through your shop, you have your own local network and you are much closer to your customer than internet vendors, who have to put in much more effort to develop customer relations. A web store cannot function without brick and mortar shops. Would you ever consider working with them?”, was one of the questions he asked.

According to one of the dealers, staff is one of the biggest bottlenecks. “As an entrepreneur you may come up with brilliant ideas, it is still up to your staff to implement those ideas. Not everyone is equally good at everything. It is extremely difficult to get your staff completely on the same wavelength as yourself.”

After the Timyo-tour, the group went on electric bikes to visit two other factories. Wuhu produces high-quality decals for many different EU (e)bike brands. A-Forge is a metalworking company that produces preformed frame tubes. The group was shown how a frame tube for an integrated battery takes shape. Frome there, the group cycled through an impressive, new park to a temple on a mountain top, which offered breath-taking views of the Yangtze river.

Steve Zhu had invited a group of local businesspeople to join the European group for a diner at the factory. This turned out to be an extremely pleasant evening, which was spectacularly concluded with Chinese fireworks.

PHYLION & BAFANG | The next day of the journey led to Phylion, a large battery manufacturer, active in four sectors and for whom light electric vehicles are an important segment. They produce batteries for among others Accell, Cycleurope, Cortina and Stella. Phylion produces both cells and packs. The group was shown step by step how batteries are created, from a single cell to a complete battery in its casing; a complicated process that still involves a lot of manual work.

Last on the agenda in Suzhou was Bafang Electric. The night before, Bafang had invited the group for dinner in one of the most famous restaurants in town. The Bafang team was extremely welcoming and, after the pizza lunch, took the group on a factory tour. Since the 2016 dealer trip, it was apparent that the production process had undergone many changes. It is more automated, using fewer people, although there is still a lot of meticulous manual work mainly done by women. Bafang is known for the many checks during and after production to keep the quality as constant as possible. In the company presentation, it was announced that Bafang intends to invest more in dealer knowledge through training. It is not yet clear how they plan on tackling this, but it is a fact that they will implement a dealer policy.

Finally, the group had the opportunity to test ride all kinds of bicycles. The racing bike with the Bafang M800 proved to be the most popular model and convinced everybody that there is indeed a market for electric racing bikes.

TAILG | On Thursday, the first visit was to TAILG, to the bicycle factory in Shenzhen and the scooter factory in Guangdong. Both factories were huge, producing 3 million vehicles on an annual basis. The Dutch company Buzaglo has recently entered into a partnership with TAILG. More news on this collaboration, which only concerns electric bicycles, not scooters, is soon to come.

The TAILG Group started in 2004 as a designer and manufacturer of electric vehicles, not only e-bikes but also e-scooters, e-tricycles and e-motorcycles. For years they have mainly focused on the Chinese home market, which explains why the name TAILG is hardly known in Europe. But that should change now, since TAILG joined the United Nations Environmental Program (UNEP) in March 2019 to promote clean mobility in large parts of the world. In the meantime, 31% of TAILG’s production is still for the home market. The rest is sold outside China, with a 24% share for Europe followed by North America (19%), South America (13%) and Africa (10%). TAILG is definitely a name to keep in mind.

WORLDPOWER | After the visit to TAILG, the bus headed to WorldPower, a medium-sized battery manufacturer from Shenzhen, who is determined to grow its business in the electric bike sector. The company name is formally Shenzhen World Electronic Co. Ltd.; they claim to be one of the first battery manufacturers in China. They started in 2002 but the production of their WorldPower batteries is in full swing since 2009. Founder Peter Liu initially produced batteries for medical equipment, garden tools and later also for electric bicycles. From the outset, they have consistently chosen to focus on overseas markets, because the home market is all about low-priced products. To WorldPower, the European and American markets are much more important because there is a higher demand for good quality batteries. WorldPower is currently working to increase their market share in Europe, especially in Germany, Spain, Italy, France and the Netherlands.

DAHON | Friday was the last day of factory visits, starting at the new sales office of folding bike manufacturer Dahon in Shenzhen. Unfortunately, the factory could not be visited because Dahon is in the middle of a transformation phase. We were welcomed at the brand-new sales office, which was largely operational, but where not all moving boxes had been unpacked yet. Dahon owner and founder Dr. David Hon, guided the group whilst telling fascinating stories about the history of Dahon and the successes achieved in the past. He also talked about Dahon’s innovative product lines, such as the electric scooter, of which there are two variants. One is fully automatic and the second only functions with pedalling, basically the same principle as with an e-bike.

Dr Hon also explained a recent policy change at Dahon. Whilst previously, they mainly produced for themselves under the Dahon brand name, they now also seek collaboration with the industry, allowing other brands to apply Dahon technology on their own bicycles. Upon the presentation, the group went outside for test rides with several folding bicycles and e-scooters. As usual, the group was very eager to try out the variety of vehicles. After lunch, jointly offered by Dahon and Missile Bike, the group went on to their last company visit.

MISSILE BIKE – Hugo Xuguo is the owner of the Shenzhen Sanding Vehicle Co. frame factory. Ltd., which also markets the sporting bicycle brand Missile Bike on the home market. It was not surprising that he and David Hon offered lunch together to the participants of the China trip, because the two entrepreneurs are close friends. In fact, Xuguo even worked at Dahon in the past.

As a professional Chinese sports bike brand, Missile has been committed to designing, developing and developing sports bicycles for almost ten years. Missile offers a variety of steel, alloy, titanium and carbon frames for sports and leisure bikes, seemingly very popular on the home market. Missile is sold in all provinces and cities of China and in more than 10 countries around the world.

Since the founding of Missile, the company also supports various charities. The “Misell Fund” was established in 2013 to help poor students, poor elderly people and other people in need of help.

MOTINOVA | Missile also provided some other companies with an opportunity to present their products. The most interesting of these was unmistakably Motinova, which recently opened a factory for e-bike systems in Vietnam and will also enter the European market. Test drives left the dealers surprised about the driving behaviour and the support of these silent e-bike mid-motors.

SIGHTSEEING HONG KONG | Last stop was Hong Kong, where the group of participants was treated by the Royal Pacific & Towers Hotel to an upgrade. The hotel is located right in the centre of Hong Kong, within walking distance of all famous shops. On the penultimate evening of the dealer trip, In the evening, the group was welcomed by Charles Drapers from cycling bag producer Pointed NV (Willex). He took the group to the famous Peak, which offers an amazing view of Hong Kong. The sight is impressive during the day, but in the evening, with so many buildings illuminated, it is absolutely breath-taking.

Drapers, who has been living in Hong Kong for 25 years, is an inexhaustible fount of knowledge about the city. He can take you to places and tell you stories, which you will never find in any tourist guide. All travel companions were in absolute awe of the unique insight he offered into this fascinating place. This was a beautiful ending to a highly inspiring and enjoyable trip. The participants were clearly highly impressed by China in general as well as by the companies they visited. They stated on several occasions that their preconceptions were not exactly in line with reality and that this trip had given them a far better and deeper understanding of the e-bike business in China. Mission accomplished!