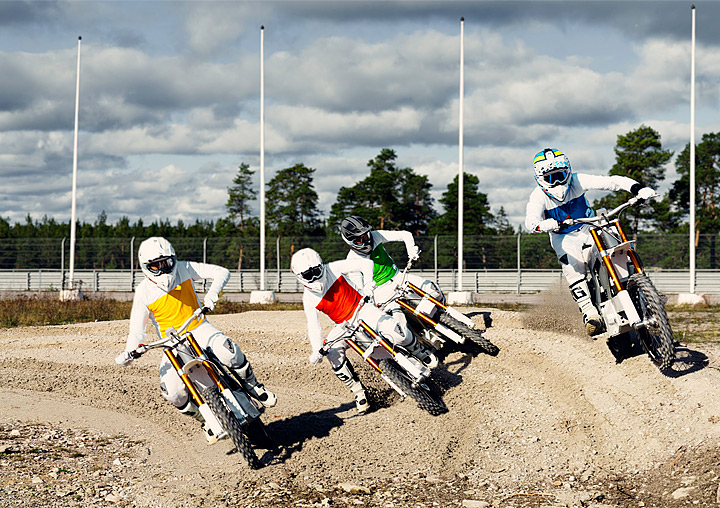 21 January 2021  – LEVA-EU member CAKE announced that the inaugural CAKE Kalk One Design Global Championships will take place as a single event at the Gotland Ring on the island of Gotland, Sweden in the summer of 2021. The final date will be decided and announced before the end of March.

The first championships will be an invitational, with 16 riders from around the globe from the disciplines of Enduro, Motocross, Supercross, and Downhill Mountain biking. Men and women will race together in a 4X format on a CAKE-specific track built at the Gotland Ring. Furthermore, the event will be raced in Round Robin format, where all riders get a chance to face each other until the semi-finals and finals, then raced in regular Knock Out format.

“The CAKE Kalk One Design race is a 4X (read 4-cross) format. With four racers in each heat racing to qualify. It’s a double elimination concept with winners and losers rounds, to eventually announce a winner,” says event and race coordinator, JP Baralo.

“Our ambition is to bring back motorcycle racing to the masses, fighting the decline in traditional ICE two-wheeled motorsport events. There’s a real possibility to spawn a new spectator-friendly competitive sport. The One Design enables this wonderfully because we can operate professional races in urban locations without noise, minimal disturbance, and zero pollution (70% of tracks around the world have had to close down the past 15 years due to the opposite). Pair this with the limited need for space and the ease of attracting spectators and media, and it’s a game-changer,” commented event creator and organizer and CAKE founder and CEO Stefan Ytterborn. “And, from a broader perspective, with the ease of riding, steep learning curve, and feathery weight, CAKE’s motorcycles are an inclusive way to bring action pursuits to the masses—wherever there is a small piece of land someone can get into the sport. We were fully committed to delivering a race series this year, however as the Coronavirus continues to cause disruption we decided to focus on a single event, a taste of the excitement to come next year!”

For 2022, CAKE is expanding the event into a series of urban races in major cities worldwide called Global City Racing. The race event will take place Thursday through Sunday, in the spirit of fun, excitement, and sustainability.

The one design concept will be restricted to competitors with only standard Kalk OR and Kalk INK ORs. Apart from battery swaps, riders will not be allowed to change anything unless it is the same replacement part.

Race images available here. For more information on the series and the Global Championships, visit: ridecake.com/onedesignrace.