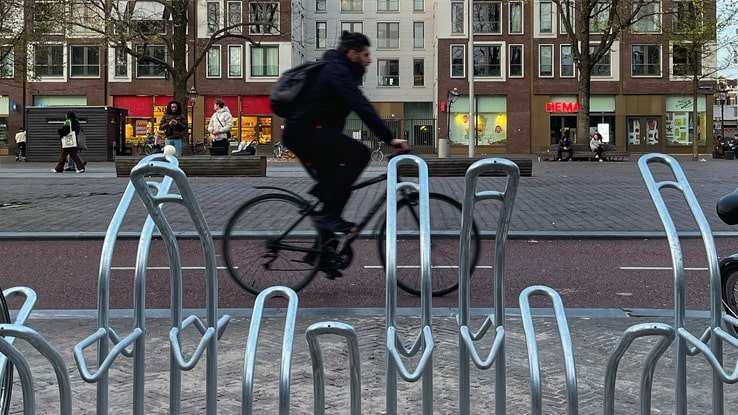 The new design commissioned by the city aims to facilitate many types of bikes, improving on current flawed designs

A newly designed bike rack has appeared in Amsterdam, on Haarlemmerplein. The model was designed by the city itself in response to more conventional bike racks failing to cater to the varying bike sizes and varieties utilized across Amsterdam. Allegedly, the “ultimate bike rack” can do it all.

The new installation is a product of extensive research conducted with residents, in which they expressed which existing facilities were suitable for parking and storing their vehicles, and which were not. Tests were run throughout the West borough, where varying racks were placed and feedback provided; this informed the new ‘ultimate’ design.

“According to the city website, the new model features more space between the bicycles which is good for models with a crate or wide handlebars. Furthermore, the rack also takes into account the increasing number of heavy e-bikes driving in the city. In addition, the rack is low enough, so one does not need to lift their bike to secure it.

The rack also fits children’s bicycles and bicycles with thicker tires up to 7 centimeters. It stores more bicycles in a smaller space and it also looks neater. In addition, the ground under the rack is easier to wipe clean, authorities claim. And finally, the rack is produced in a sustainable and circular way.” – A. Dimitrova

The new design will complement existing models rather than replace them. Following further feedback, the rack will be rolled out on a larger scale in busy areas, during refurbishment projects, in locations undergoing major maintenance, and in places where outdated racks must be replaced.